According to the latest research it is known that in the space of the Cathedral stood a temple of imperial worship. The building was surrounded by a large porticoed square of about two hectares in length. In the porticos opened rooms of semicircular or quadrangular plant that, generically, denominates exedras. These rooms were richly decorated and could be presided over by large statues or sculptural ensembles. Recent archaeological excavations have documented the remains of an exedra plant in the northwestern sector of the ancient temple square of imperial worship. From the preliminary data obtained it is possible to verify that the exedra had semicircular form, both internally and externally, and that it was covered with a quarter of sphere. The foundations or platform of the pavement of the exedra have been documented. It was dismantled in late Roman times with the aim of recycling the materials. In medieval times space was enabled as a canonical dependency at two elevation levels, through a cover supported by two diaphragmatic arches and two large closing walls. The Roman remains remained buried. In 1914 the space was adapted as the first room of the Diocesan Museum.

I Room. Old Refectory:
The old refectory or dining room of the canons was built in the twelfth century and is covered with pointed canyon vault. Its head is still part of the Roman wall of the first-century portico. The area now visible corresponds to the left half of the old refectory. It currently houses the Sala I of the Diocesan Museum. 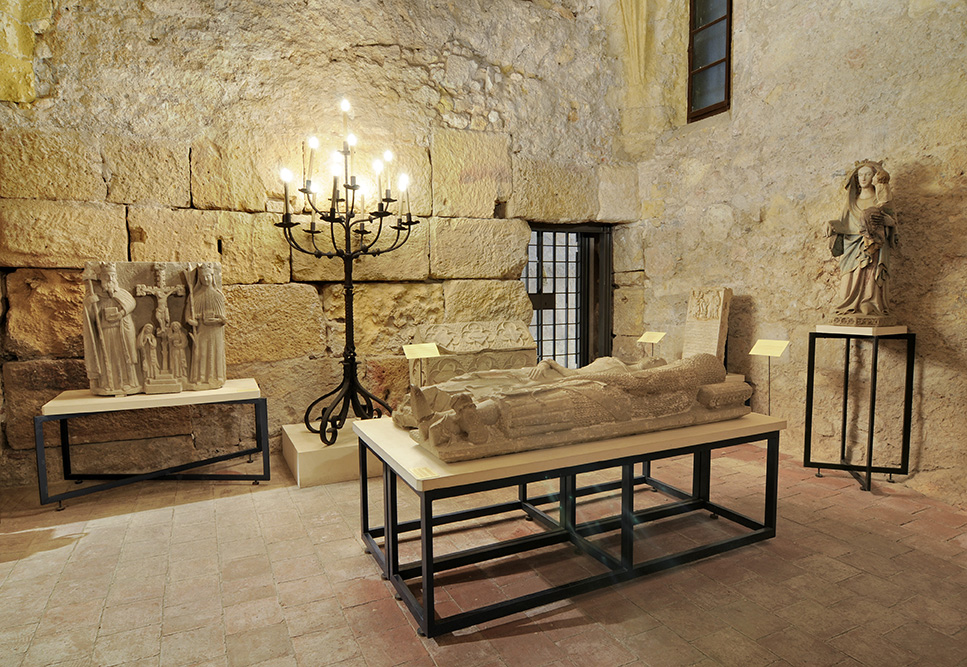 Originally, it was the old Chapter Hall, which was built at the beginning of the 13th century with a quadrangular plan and covered with pointed vault. In the year 1330 the canon Guerau de Rocabertí had the head open and built a polygonal apse, transforming the area into a chapel dedicated to the Eucharist, which is why it is called Corpus Christi. The polychrome stone images that decorate the walls are from the first half of the 14th century and represent various saints and apostles, as well as an Annunciation. This chapel currently houses the Sala II of the Diocesan Museum, where it shows a selection of its extraordinary collection of Gothic painting, as well as sculpture and liturgical silverware. 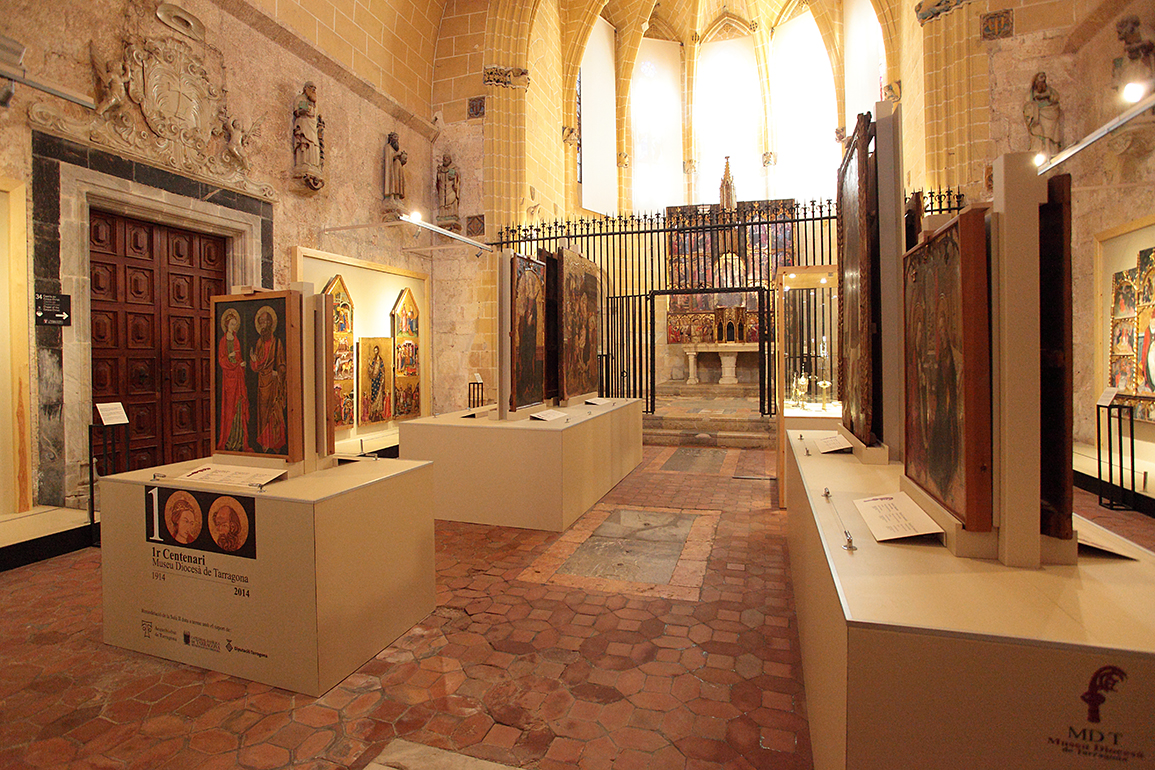 Chapterhouse:
Baroque period, it is the classroom where the canons meet in the solemn occasions of taking possession and where the deliberations take place. On the left wall is one of the most important tapestries of the collection, the Potestas, which was held in Arras (France) in the fifteenth century. From the right wall hangs the mortuary cloth of Pere Anton d’Aragó, embroidered in Rome in the XVII century and coming from the monastery of Poblet. . 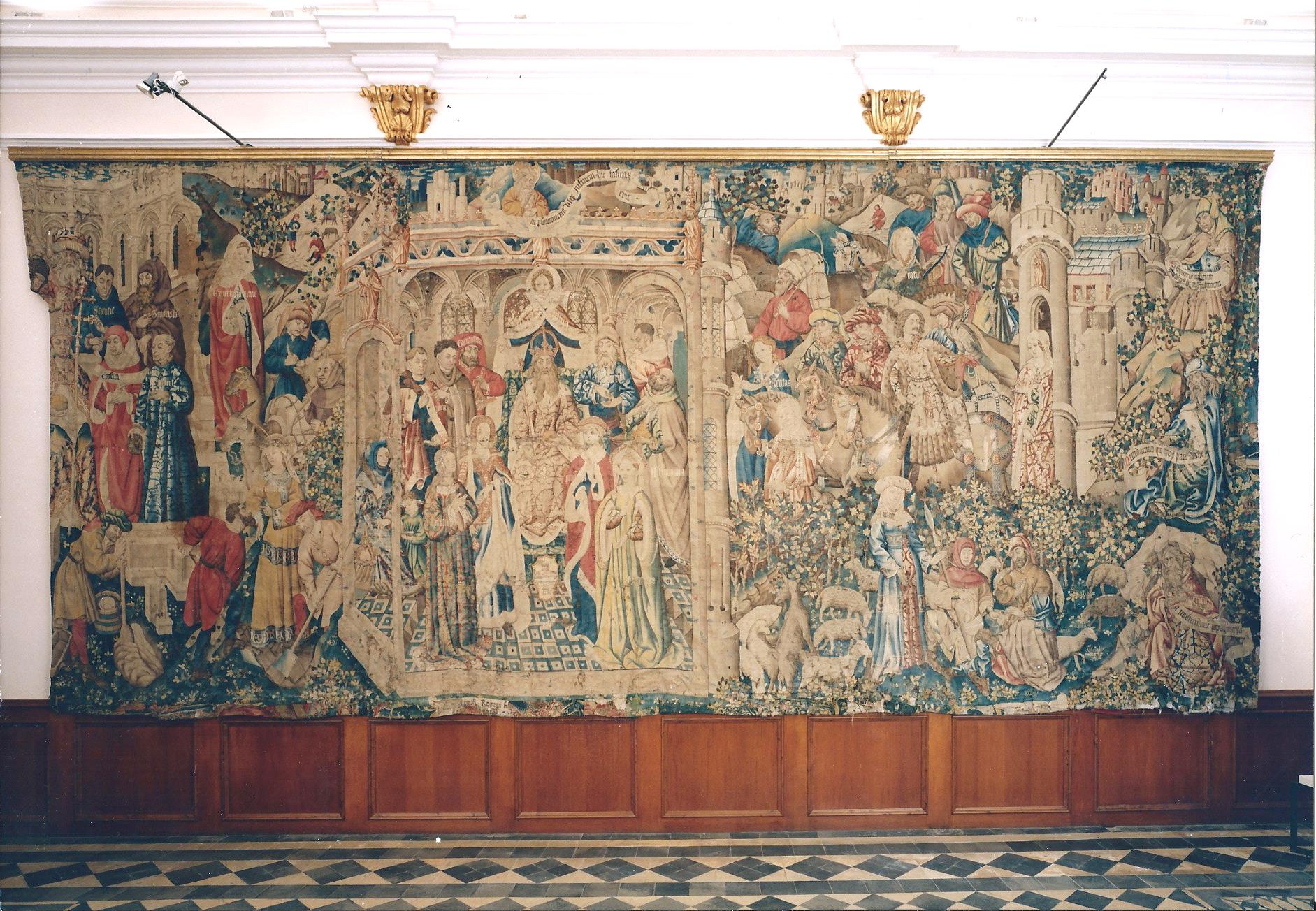