The Diocesan Museum of Tarragona guards about 11.000 works of art, of which 237 are showed in the permanent exhibition and the others are kept in the reserve rooms. All works of art allow a cronological lecture of the artistic activity, the styles and the schools in the Tarragona’s Diocese. The collection’s content can be classified as follows:

In the Diocesan Museum there is also an important collection made up by 54 tapestries and coats of arms dated between the 15th and the 18th centuries, belonging to the Cathedral, a silverware’s select showing of the Cathedral’s Treasure, and the modernist processional custode designed by Bernardí Martorell.

Prehistoric Collection:
The group of elements from the excavations in the Josefina Cave, next to the Escornalbou’s castle (Baix Camp), reports of the human occupation in our region from the Neolithic up to the Age of Bronze. It should be noted a flat axe made of bronze.

Roman Collection:
Architectural fragments, sculpture, epigraphy, ceramic, glass, metal, mosaics and numismatic. Most of them come from excavations or researches made in the Cathedral or surroundings. The most important pieces are the Sarcophagus of Apollo and the nine Muses and the funerary stele of the Eutyches Auriga.

Early Christian Collection:
Some examples of epigraphy and ceramic. (Come back) 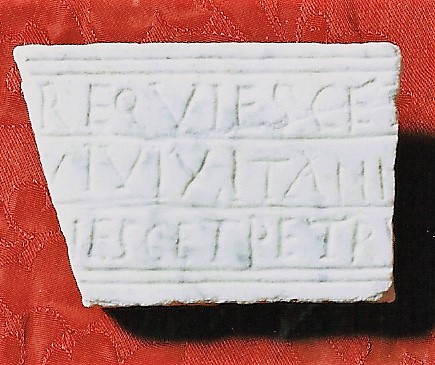 Fragment of a paleo-christian inscription

Visigothic Collection:
It is made up by a liturgical vase and a buckle, both made of bronze and found in a tomb on the Saint Thecla’s garden, next to the Cathedral, as well as some sculptural fragments, also from the Cathedral.

Hebraic Collection:
There are two important funerary inscriptions, one Hebraic and the other Latin, from Falset (Priorat) and Pallaresos (Tarragonès) respectively.

Hispano-Arabic Collection:
The arch dated in 960, in origin from Madinat-al-Zahara (Córdoba) and found in the Cathedral, is the most important piece. There are also some fabric’s fragments found in various tombs on the Cathedral and a little numismatics’ collection.

Medieval Collection:
It is made up by works of art from the Cathedral and most of the churches, sanctuaries and chapels of the diocese. It should be noted the collection of sculptures made with polychromatic wood and stone, dated between the 12th and the 15th centuries, as well as some fragments of stone altarpieces. It is also important the epigraphy, especially the canonical tombstones, where it should be pointed out the tombstone of the canon Raimon de Milà, so important for the chronology of the Cathedral’s construction, due to the shortage of documentary sources. There are wrought iron pieces like the brazier from 13th century, the candelabrums or the bars of “la figuera”. The liturgical objects of the archbishops Bernat d’Olivella and Roderic Tello are preserved, with pieces like chalices, patens, volutes of crosiers and valuable fragments of liturgical clothing. There are also some interesting copes and embroidered chasubles. It should be noted the triangular floor tiles decorated with bestiary, from 14th century. It should be noted the little chest of Saint Pere Ermengol, from La Guàrdia dels Prats (Conca de Barberà), which, in addition to its artistic and hagiographical value, specifies in its iconography the Catalonia’s role in the political concert of the medieval Europe. The beams and the planks from the coffered ceilings of Alcover (Alt Camp), Montblanc (Conca de Barberà) and Paret Delgada (La Selva del Camp, Baix Camp) show the importance that this type of decoration had in our region. There is also an important numismatics collection.

The most renowned part of this medieval collection is the Gothic Art Gallery, made up by a significant number of mural paintings, altarpieces and panels from the 14th and the 15th centuries. They form the most important collection of the south of Catalonia and they are an evidence of the local pictorial school’s evolution. From the mural paintings of Peralta (Tarragonès), there are valuable evidences of the painting’s improvement since the lineal gothic with French and English influences, continuing with the Italianism and the international gothic in its successive phases, and arriving to the paintings with Flemish influences. It should be noted pieces like the doors of Saint Thecla reliquary, from the Cathedral, the altarpiece of the Virgin, from Paret Delgada’s sanctuary, work of Joan of Tarragona, the altarpiece of Saint Bartholomew, from the Cathedral, work of the Santa Coloma de Queralt’s master, the altarpiece of the Virgin, from Solivella (Conca de Barberà), painted by Mateu Ortoneda, the ancient main altarpiece of the monastery of Santes Creus (Alt Camp), work of Guerau Gener and Lluís Borrassà, the altarpiece of Saint Peter, from Vinaixa (Les Guarrigues), work of Ramon de Mur, the altarpiece of Saint James, from Vallespinosa (Conca de Barberà), painted by Joan Mates, the altarpiece of Saint Michael, from La Pobla de Cérvoles (Les Garrigues), and the panel of the saints Johns, from Vinaixa, works of Bernat Martorell, the main altarpiece of the ancient church of Alcover, work of Jaume Ferrer II, or the panel with the Annunciation, from Vallmoll, attributed to Jaume Huguet, among others.

Modern Collection:
It includes some important examples between the 16th and the 18th centuries. The Renaissance, with a slow introduction in our region, is exemplified by a good collection of local paintings, most of them from the Cathedral, like the altarpiece of Saint Thecla, work of the Master Pere de Cardona, the altarpiece of Saint Roc and the panel of the Virgin of the Hope, works of the Alforja’s Master, two altarpieces dedicated to Saint Mary Magdalene and the Annunciation, work of Francesc Olives, the altarpiece of Saint Lawrence, from Rocallaura, and some panels, works signed by Cristòfor Hortoneda. Moreover, there are some interesting panels of local production. There are also foreign productions, like the panel of the Nativity, work attributed to the Valencian Vicent Macip. The renaissance alabaster sculpture has some examples from the monastery of Poblet, like the relief of Saint Jerome.

From Baroque period, the museum has some prominent sculptures made with polychrome wood. It should be noted those made by the sculptors Lluís and Francesc Bonifàs i Massó, from Valls, and a group of sculptures made with ivory. The religious paintings between the 16th and the 18th centuries form a large collection. It should be noted some paintings of Viladornat and Josep Juncosa. From Modern period, there are also canvas made with tiles, which have religious representations, work of Miquel Lapuja and Llorenç Passoles, as well as epigraphy, metal objects, handwritten and printed books of choir, furniture, silverware, liturgical clothes, embroidered front altar panels, brass alms bowls, medals and coins. 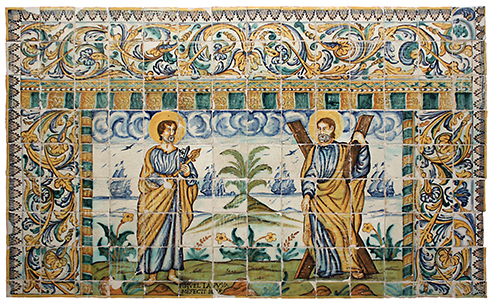 Panel of tiles with Saint Peter and Saint Andrew

Tapestry of “Potestas” or “The Good Life”

Contemporary Collection:
The paintings between the 19th and the 20th centuries are made up by episcopal emblems and portraits of archbishops and canons. There are also printed books, coins and devout medals, among other objects. One of the most prominent groups is the collection of nativity figures, from the noble Canals House of Tarragona.